Some Etiquettes of Reciting the Qur’an
Share:FacebookTwitterLinkedInPinterestEmailWhatsApp
Featured Articles

Some Etiquettes of Reciting the Qur’an

It is important for the one reciting the Qur’an to not be a mere reader; but rather, one should bring the Qur’an alive in one’s life by exerting energy and effort in acting upon the etiquettes pertaining to it. Doing so will bring about a complete different spirit into one’s life. The book of Allah is not a regular book that one may read in whatever manner one desires; its recitation has rules and Adaab which should be implemented.

There are numerous virtues of reciting the Qur’an; the following prophetic statements highlight a few of them:

On another occasion, the Beloved of Allah (May Allah bless him & give him peace) said, “The one who is proficient in reciting the Qur’an will be with the honourable and obedient scribes (angels), and one who recites the Qur’an and finds it difficult to recite, doing his best to recite it in the best way possible, will have double rewards.” (Bukhari and Muslim)

There are several etiquettes when reciting the Qur’an. Here are some of them:

Some of my Teachers 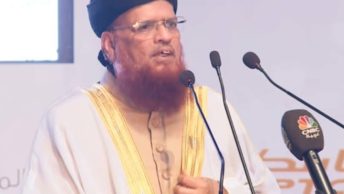